Elgin Cathedral was dedicated in 1224 and was enlarged and renovated following the fires of 1270 and 1390. The cathedral grounds became the burial ground for Elgin several centuries ago. We climbed the tower to see the great views.

Next we stopped at Brodie Castle  which was built in 1567 by Clan Brodie but destroyed by fire in 1645 by Lewis Gordon of Clan Gordon, and it was greatly expanded in 1824 by the architect William Burn who turned it into a large mansion house in the Scots Baronial style.

Culloden Battlefield....From Wiki  "On the 16th April, 1746 the Jacobite forces of Charles Edward Stuart were decisively defeated by Hanoverian forces commanded by William Augustus, Duke of Cumberland, near Inverness in the Scottish Highlands."

The visitor centre is excellent with information portrayed in a variety of ways. We learnt that the Jacobites had no chance of defeating the English - they were exhausted, their plan was wrong. Both armies contained English and Scotsman. The terrain made the Highland Charge difficult but suited the English and the battle lasted only an hour. Two thousand soldiers were killed nd the aftermath was devastating to the highlanders as it's purpose was to destroy the Scottish Clan system.

From John O'Groats we drove south to the Whaligoe Steps - I discovered the Steps on Pinterest so thought we should go see them and I made it to bottom and back up again - all 330 steps - I counted them.

Info from Wiki "Whaligoe, (whale geo or inlet of whales) is a small port which was prospected by Thomas Telford in 1786 during his tour of northern fishing harbours for the British Fishing Society. His judgement of the place was that it was a "terrible spot". However, undaunted, Captain David Brodie spent £8 to cut the famous 330 steps. His confidence was rewarded in 1814 with the harbour supporting 14 herring boats."
We stopped at Dunrobin Castle which is the family seat of the Earl of Sutherland and the Clan Sutherland and had a great falconry display, a museum with taxidermy animals which were trophy heads of animals shot on safari and artefacts.

We stopped at the Black Isle Brewery in Munlochy which does tours before heading to our bed and breakfast in Culloden which had views of the viaduct...

On the way to dinner we went to the standing stones and clava cairns in Culloden. Clava Cairns are circular stone burial tombs. The three Balnuaran of Clava cairns were built in the bronze age and have a ring of standing stones surrounding them. 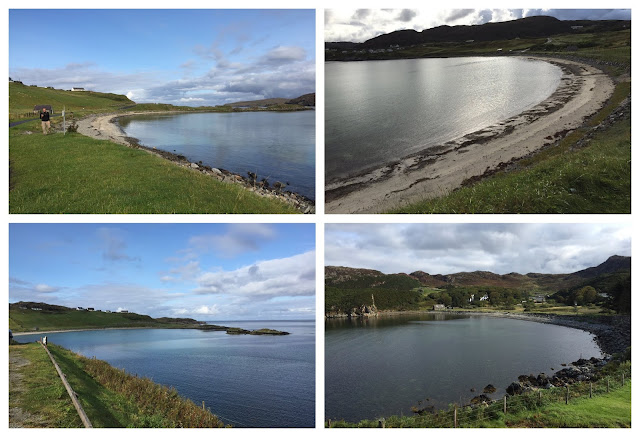 Photographed a little house on an inlet of Loch Laxford....This is one of my most favourite photographs I took on this trip - we were driving in the car and I didn't expect to see this house so grabbed my phone and took a couple of quick shots. Kevin says it's blurry and I like that it's blurry but the house is so in focus that it doesn't even look like it's real.

We stopped to take some pics of the view in the rain and met a guy on a motorbike who had stopped to take some photos too and then the rain came in. I've looked this place up on the map and cannot find a name...we were on the A894 to Durness...
We stopped at Balnakeil to see the beach, church which is a scheduled monument and cemetery which has a few famous people in it, the arts and crafts village which was built in 1950's as an early warning station in case of nuclear attack but never finished and stopped for hot chocolate.
We kept on travelling along the coast road to Smoo Cave... The cave is near the coastline and the Smoo River travels from Loch Meadaidh to the coast which is made of limestone. An underground stream and sea erosion formed the cave and the Smoo River flows into the cave via a sink hole and waterfall.  The cave has been used by people since before the Vikings. The cave name is thought to have originated from the Norse 'smuga' meaning a hole or hiding place.

House along the coast: 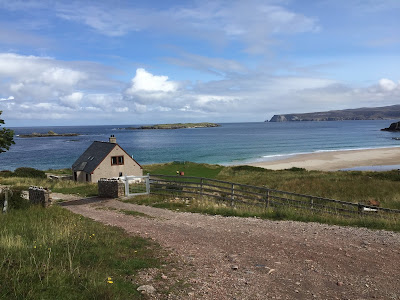 Driving further along the North Coast 500 Route we came to and old town site near Rispond Beach. Ceannabeinne in gaelic means the end of the mountains. According to Wiki "Ceannabeinne is said to have been a thriving "township" until the Highland Clearances of 1842, which resulted in rioting. There were once fourteen houses in the village of Ceannabeinne, all of which are now ruined." There is a walk trail which we followed and took some photos of the beach.

Stunning views as we went around Loch Eriboll...
We even saw lime kilns from the 19th century whilst driving north on the east side of Loch Eriboll. 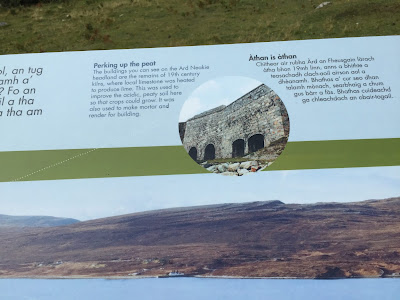 Then we crossed the Kyle of Tongue...

I found this interesting information on Wiki "In 1746, a naval engagement occurred at the Kyle involving Bonnie Prince Charlie's Jacobite rebellion.[7] The Jacobite ship Le Prince Charles, commanded by Captain Richard Talbot, was bringing a large amount of French gold to aid the Jacobite cause. It was chased by a British squadron and one of the Royal Navy frigates eventually caught up with it in the Kyle of Tongue, on 25 February 1746. A fierce five-hour battle took place: the Jacobite ship fought bravely, but in the end was defeated. The failure of the gold to reach the Prince's army was one of the main factors which led to the Battle of Culloden." I wonder what happened to all the gold....

Photo 1Views on the drive between Loch Eriboll and Kyle of Tongue, Photo 2 driving over the Kyle of Tongue causeway view to the north/sea, Photo 3 - View to the south and mountains, Photo 4 Kyle of Tongue view from the east side climbing up the hill.
The view of Ben Loyal...

We travelled along the coast to Thurso

And finally we reached John O'Groats, the north east point of Scotland and celebrated with a local cider and beer. Woohoo!!!

Woke up to sunshine and took some photos from the hotel overlooking Loch Maree.

Then continued on the North Coast 500 Route to Loch Ewe... 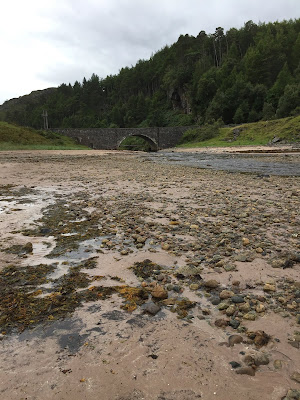 Then we are driving along and we come upon these castle ruins - Ardvreck Castle - from Wiki: "The castle is thought to have been constructed around 1590 by the Clan MacLeod family who owned Assyntand the surrounding area from the 13th century onwards. Clan MacKenzie attacked and captured Ardvreck Castle in 1672, and then took control of the Assynt lands. In 1726 they constructed a more modern manor house nearby, Calda House, which takes its name from the Calda burn beside which it stands. A fire destroyed the house under mysterious circumstances one night in 1737 and both Calda House and Ardvreck Castle stand as ruins today."

We then headed west to Clatchtoll Beach...

Clashnessie Beach....who would have thought Scotland would have this many nice beaches but it was raining and too cold to dip our toes in.... 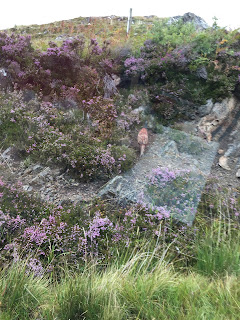 And stopped at Drumbeg lookout to take a photo in the rain...

And to Loch A Chairn Bain... 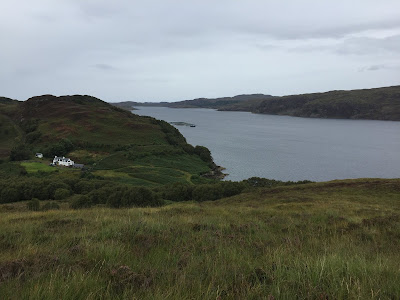 Then we crossed the modern Kylesku Bridge and stopped  to admire the views...

Then we arrived at Eddrachilles Hotel at Badcall Bay near Scourie....the views were great, phone coverage was nil and internet not the best, but they have afternoon tea available free every afternoon with scones and cakes and tea. Dinner was yummy and the following morning I just had to photograph the crockery which we loved.