Here are the photos of all the viaducts and aqueducts we visited on our trip to Europe. 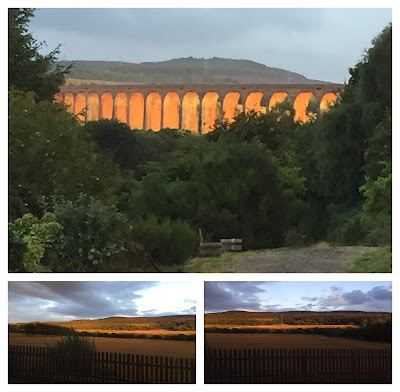 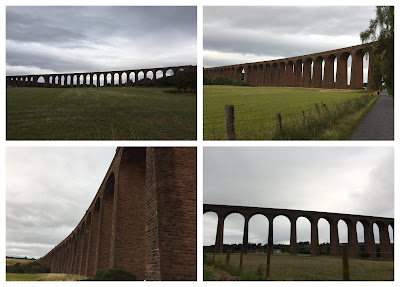 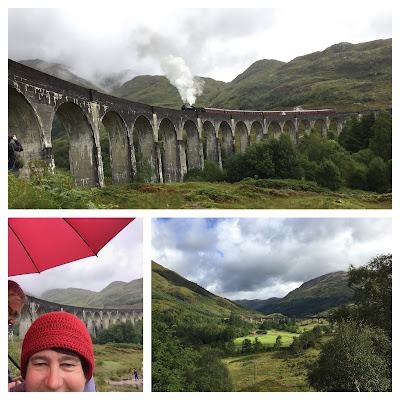 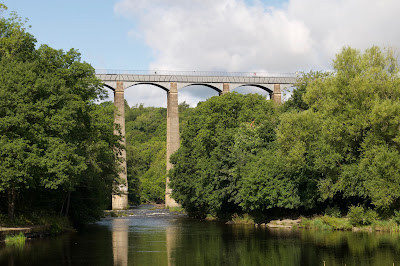 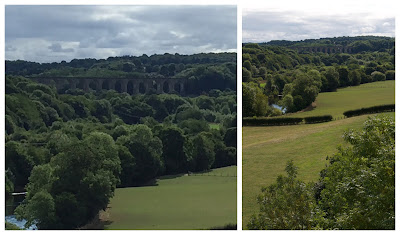 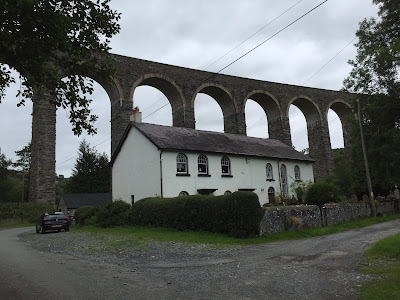 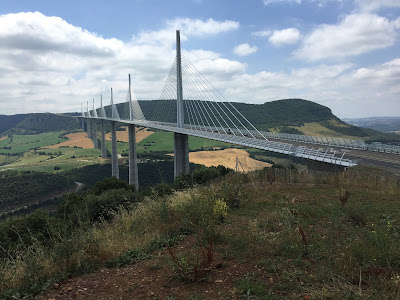 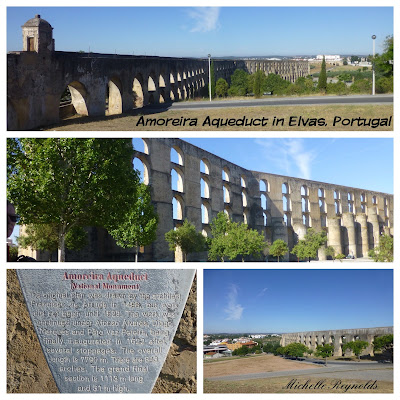 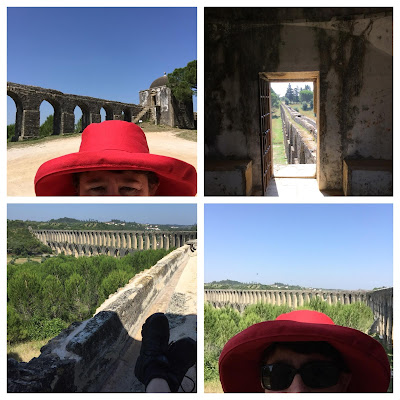 We visited family in Westgate on the east coast. 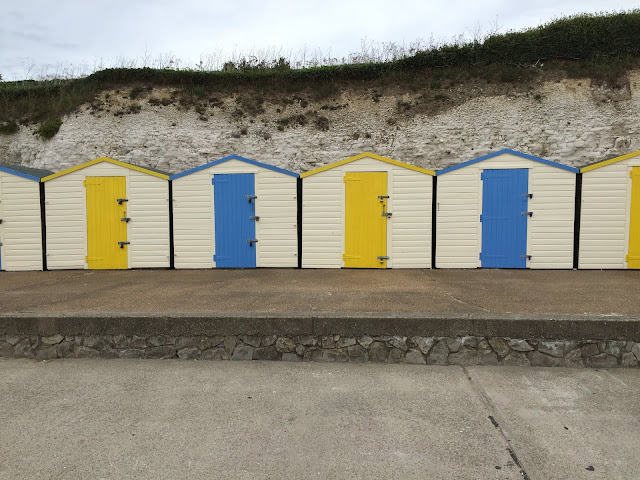 I was very sick for a couple of days but well enough to fly home and very glad to be home after such an amazing trip.
Posted by Shells at 07:00 No comments:

We headed south to England and visited Chatsworh House. I took this photo of the Falkirk Kelpies from the main highway - they have caused accidents...

CHATSWORTH HOUSE aka Pemberley from Pride and Prejudice.

We had to stop and see on of the most spectacular houses in England and it is the seat of the Duke of Devonshire and it has been home to the Cavendish family since 1549. Why is it spectacular?  Every room is huge - twice the normal height, every ceiling is painted, the rooms are furnished, the sculpture hall is amazing, the artwork is beautiful and the gardens are stunning. It wasn't cheap to enter as it is not part of the National Trust but is now part of a family trust and it's a business with a great gift shop, cafes and restaurant. I loved it.

The House has been used in many films and television shows but my favourite is the 2005 version of Pride and Prejudice with Matthew McFadyen and Keira Knightly.

Bo'ness is short for Borrowstounness and is a village on the Firth of Forth between Edinburgh and Falkirk.

Midhope Castle is a 16th century tower house and today is a derelict chateau which is famous for being on the television series Outlander.

Bo'ness Motor Museum - has a great collection of television and film cars, memorabilia and props, as well as a large collection with a James Bond theme. I saw the car from Back To The Future and Harry Potter, knocked on the Tardis but the Doctor was not home, I met Sully from Monster's Inc and a creature from Stars Wars.


Bo'ness and Kinneil Railway Station - no steam trains running on this day. This heritage railway has featured in several movies including The Railway Children and The Railway Man as well the Outlander television series.

Falkirk Wheel - is an amazing feat of engineering and it was great to see the rotating boat lift in action. Photos don't do it justice so I'll go look for a youtube link if your interested then have a watch... Fifty seconds long so take a look...  https://www.youtube.com/watch?v=fX6kJKjg4y0

From Wiki "The Falkirk Wheel is a rotating boat lift in central Scotland, connecting the Forth and Clyde Canal with the Union Canal. The lift is named after Falkirk, the town in which it is located. It reconnects the two canals for the first time since the 1930s. It opened in 2002 as part of the Millennium Link project. The wheel raises boats by 24 metres (79 ft), but the Union Canal is still 11 metres (36 ft) higher than the aqueduct which meets the wheel. Boats must also pass through a pair of locks between the top of the wheel and the Union Canal. The Falkirk Wheel is the only rotating boat lift of its kind in the world, and one of two working boat lifts in the United Kingdom, the other being the Anderton Boat Lift."

Falkirk Kelpies - are a 30 metre high horse-head structure built with structural steel and a stainless steel covering and are named after the mythological water horses.  They were awesome!
And for dessert that night I had a Knickerbocker Glory - yum! 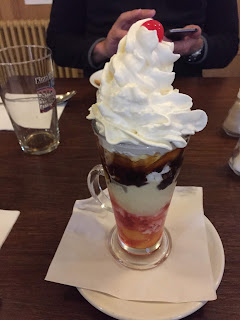 Our first stop of the day was Blackness Castle - which we loved. Built on the rocky shores of the Firth of Forth in the 1440's this fortress is shaped like a ship. Over the centuries it has been used as a prison and minor garrison and was briefly used in WWI. Blackness Castle like Braemer Castle has an iron yett or gate.

The castle has been used as a filming location -  Hamlet,  the Bruce, Doomsday, the television miniseries of Ivanhoe and Outlander.

We then traveled by train into Edinburgh to go to the castle, walk down the Royal Mile, through the cemetery to see the views of Arthur's Seat and towards the castle.

We drove south to from Perth and stopped at Scotland's First Conservation village of Falkland, which has a 16th century castle (top and bottom right)but it was not open. The Victorian Gothic Bruce Fountain stands in the middle of the street. The village was used in the television series Outlander as Inverness in the 1940's. It was a dark, rainy morning so the photos are not the best.

Doune Castle was originally built in the thirteenth century, then probably damaged in the Scottish Wars of Independence, before being rebuilt in its present form in the late 14th century. We really loved Doune Castle as it was used in Monty Python movies, the Outlander television series as Castle Leoch, in The Game of Thrones and also the movie Ivanhoe. Monty Python's Terry Jones provides a very funny narration on the audio guide which also includes Outlander's Sam Heughan providing the Outlander narration.

Stirling Castle is one of the largest and most important castles in Scotland. From the first photo you can see that it sits atop a rocky hill with steep slopes on three sides.

From Wiki: "Most of the principal buildings of the castle date from the fifteenth and sixteenth centuries. A few structures of the fourteenth century remain, while the outer defences fronting the town date from the early eighteenth century. The castle was besieged in 1299 by forces including Robert Bruce. On 23–24 June, King Robert's forces met the English at the Battle of Bannockburn, within sight of the castle walls. The resulting English defeat was decisive. King Edward attempted to take refuge in the castle, but Mowbray was determined to keep to his word, and the English were forced to flee. Mowbray handed over the castle, changing sides himself in the process. King Robert ordered the castle to be slighted; its defences destroyed to prevent reoccupation by the English." This is why there is a statue of Robert the Bruce out front - second photo in the top collage.
BATTLE OF BANNOCKBURN

Then we went to the Battle of Bannockburn Experience/Visitor Centre uses 3D technology and an interactive experience to teach about how Robert the Bruce, King of the Scots defeated the English King Edward II on June 1314.