Sunday Snippets (started by {tinniegirl}) - My week in photos... A collection of photos from your week. No need for words. Let the pictures tell your story. 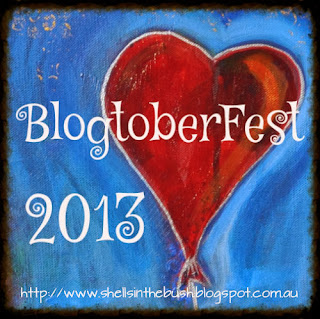 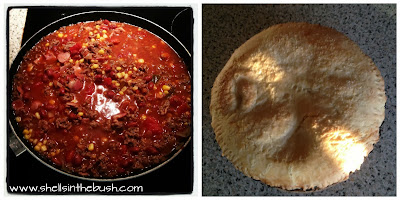 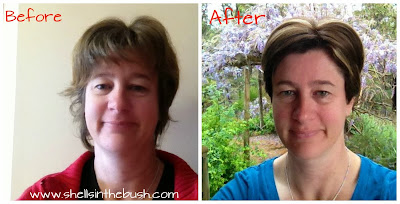 BlogtoberFest is a personal challenge to blog each day for the 31 days in October.  It can be as simple as posting a photo with no words for Wordless Wednesday or you can write about you, your family, your art/craft/writing/photography.  If you miss a day it's no big deal, I can assure you that the BlogtoberFest Police will not be coming after you as they are too busy writing their own blogs and popping over to read other people's.

This isn't a blog hop so you don't have to worry about having time to get around to visit everyone's blog and leave a comment.  It would be great if you could visit a few during the month though just to encourage everyone along and give them some support.  I will try to visit everyone but last year 333 joined, eek, so I may not get to everyone....but do look forward to reading your blog and meeting new bloggers.

This is the button and the codes can be found on the BlogtoberFest 2013 Page above.

Some ideas on what to blog about - when I was blogging regularly I used to blog according to days of the week so here are some ideas:

Monday:  Mosaic Monday - make a photomasiac to show and write about

Tuesday: Talkative Tuesday - tell us about yourself

Wednesday: Wordless Wednesday - post a photo and no words

Thursday:  Thankful Thursday - write about what you are thankful/grateful for, Throwback Thursday

Friday: Friends on Friday - write about another creative you admire, Flashback Friday

Sunday:  Sunday Snippets (started by {tinniegirl}) - My week in photos... A collection of photos from your week. No need for words. Let the pictures tell your story.

If you have any others then please let me know so I can add them to the list. More ideas on the BlogtoberFest 2013 Page above.

In 2012, Blogtoberfest was hosted by Kat McNally @ I Saw You Dancing. I am so grateful to Kat for all her hard work last year and to Cathy aka {tinniegirl} for the opportunity to babysit this gorgeous blogging festival while she takes a well-earned break.

There is also a Linky on the BlogtoberFest 2013 page so please add your name to that so we know where to find you.  Any problems you can email me at shellsinthebushATgmailDOTcom  Thank you so much for joining in, looking forward to reading your blogs!

Hi from London! Whilst hubby is packing our bags, I am blogging before we leave for the airport later this afternoon for our long flight home.

We left Wales on Tuesday, 27th August, heading south east through Somerset to Porlock to catch up with a friend of hubby's. The friend's we had stayed with the previous night had recommended some places to visit along the way including Dunster Castle - a Norman castle built in the 11th and 12th centuries, and Selworthy Green which has four thatched cottages, one is a tea room which has fabulous cakes which we didn't try as we had just had lunch. 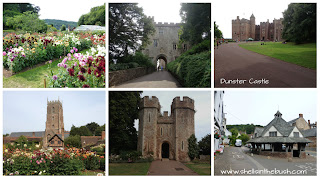 On Wednesday, 28th August we travelled back to Cousin Anne's house just south of London, stopping at Tarr Steps which is a medieval clapper bridge - it has 17 spans of stone slabs, we also drove past Stonehenge!!! 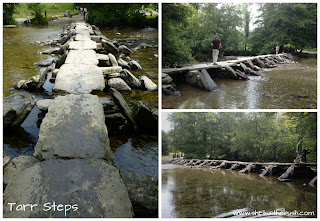 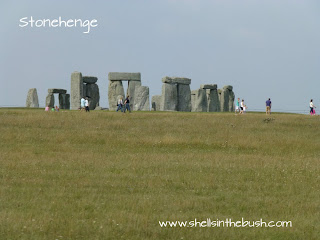 Thursday/Friday/Saturday - we just sorted out washing and the bike and returned it to the docks in Felixstowe where it will be packed into a sea container and sent home next week.

On Sunday, 1st September, after watching the MotoGP we went to Chartwell House which was Sir Winston Churchill and his wife Clementine's country home since 1922. It has beautiful views of the countryside being in an elevated position, beautiful gardens, a play house for their daughter and an artist's studio as Churchill took up oil painting when he was 40!!! 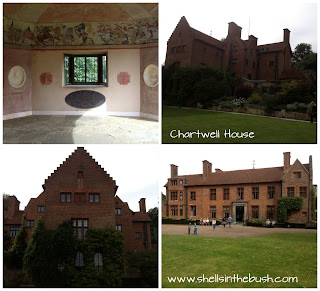 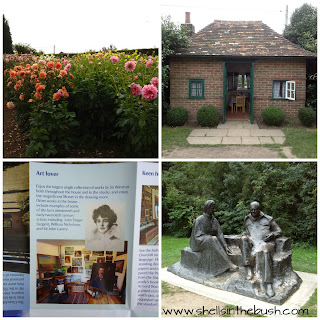 On Monday, 2nd September we went to visit Rochester where my husband was born - it has a very interesting castle and a very large cathedral. 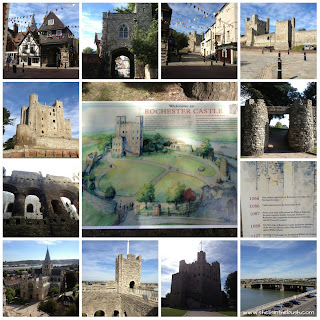 On Tuesday, 3rd September we went to Greenwich, just a couple of miles out of London and famous for Greenwich Mean Time - we went to the National Maritime Museum, the Royal Observatory, the Queen's House (which is an art museum) and then to visit the Cutty Sark. 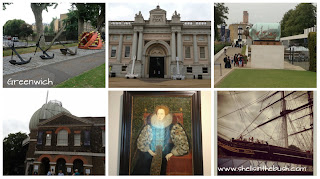 On Wednesday 4th and Thursday 5th September we went into London to the Victoria and Albert Museum, Buckingham Palace - saw the changing of the guard and to the theatre to see the musical Mama Mia. 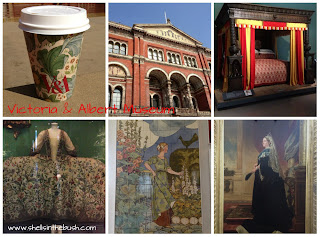 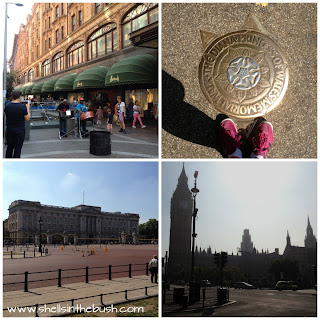 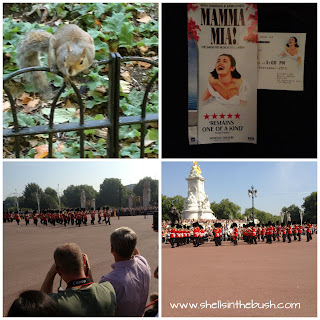 On Friday, 6th September we went to Canterbury and had lunch with hubby's aunt. 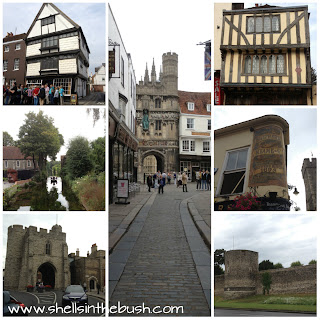 Yesterday, Saturday, 7th September we went to Richmond, a suburb south west of London to catch up with my friend Jane and visit Hampton Court. 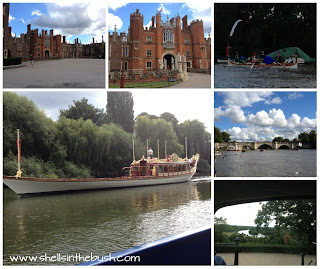 Well, that's it from me and 'boring' you with my vacation snaps I'll be back to my art in a few weeks after I've sorted out the washing and the house and photos and ordered more paints and canvases etc...

Hope you're having a great weekend, take care.
Posted by Shells at 18:30 No comments:

Email ThisBlogThis!Share to TwitterShare to FacebookShare to Pinterest
Labels: 2013, EuropeanBikeTrip

On Sunday, 25th August we caught the ferry to Wales.  We only stayed a couple of days as we had been there before in 2005 and had to get back to London via Somerset to sort out our bike.

This is a photo from our ferry looking out to the other ferry in Rosslare Harbour.

We were greeted in Fishguard, Wales by one of hubby's biker friends, so after a 'quick' chat we headed north along the coast and down a few very narrow lanes to find this cove and bay. 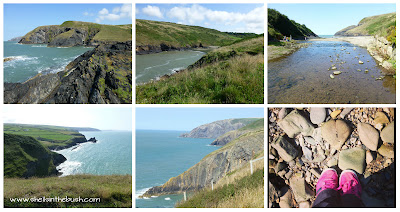 After staying the night in Carmarthen we headed to the Brecon Beacons for lunch and then to Caldicot Castle to spend the night with friends. 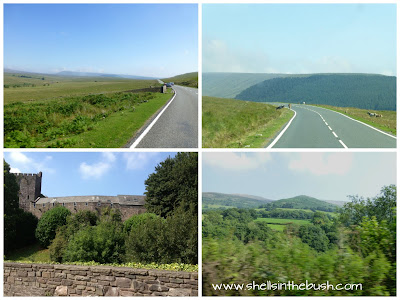 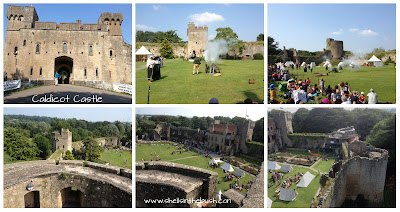 The following day, Tuesday, 27th August we left Wales and headed across the Severn Bridge into England....

So that was Wales, next time we go we will head to the north west to the Snowdownia mountains...

At the moment we are in London, staying with Cousin Anne, the bike has gone back to the shipping company in Felixstowe and we are just relaxing.  Next week we will go into London and maybe see a show, I'd like to go to the Dr Marten store and have a look at the shoes/boots/bags etc., go to Rochester and Canterbury too, as well as see family and friends.  And in one weeks time we will be packing our bags for the long trip home.  I will try to blog later in the week about Somerset in the south west of England where we went to see another castle....I've lost count of how many castles that is...I may do a blog about castles and some paintings when I return.